Simply put, I am overwhelmed (…in the best way possible).

In the week and a half since this blog launched, you have flooded my little corner of the world with nothing but kindness, generosity, celebrations of Nana, encouragement, support, and love. I tried to think of a way to sufficiently thank you – i.e. sending year-round girl scout cookies or granting an extra hour of sleep every Monday – but until I figure out the logistics of this distribution, please know I am so grateful for each and every one of you.

And, we’re just a little over a week in and we’re already nearing 10% of the fundraising goal for C. difficile. WHAT?? I’m over the moon. Thank you so much to everyone who has given so far – to C. diff and/or to others by starting your “marathon of joy” – and to everyone who is considering giving in the future. We are well on our way to making a difference for patients fighting C. diff! I can’t believe this is all happening.

I would love to share a little bit about the training so far, but before we get too much further I do have something I need to confess: I’ve never liked running.

In middle school, I dreaded the day in P.E. class when they’d make you run a mile, and I barely made it through the (less than) 5 minute “running block” in high school marching band rehearsals. The Colorado altitude, plus a mild case of exercise-induced asthma, plus a general avoidance of anything athletic placed running pretty low on my list of priorities.

So, when I added “Run a Marathon” to my mental bucket list, it was with a bit of irony and a healthy amount of skepticism. It was something that I thought I’d do in the (very far off) future after my running superpowers kicked in…that happens, right?

In a conversation last fall with Tony – the awesome author of my training plan – he said that so many people automatically count themselves out of doing something like a marathon, and just assume that they can’t without giving it a shot. I realized that I had been counting myself out, too.

Running for the sake of running has just never appealed to me, but running to celebrate Nana and to fight C. diff was something I could get behind. After sharing the idea with my family at Thanksgiving, I officially registered for Grandma’s Marathon. Despite the fact that I pushed the “submit” button myself, it was still pretty hard to believe when this showed up on my computer screen. 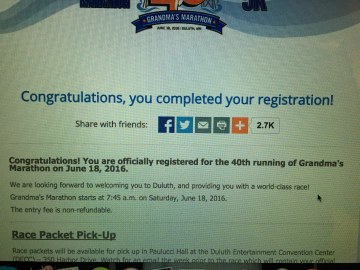 When I think about what it would have been like to show this to Nana, I can’t help but smile. She knew me better than anyone, and I think our conversation would have gone a little something like this…

Emily: Nan, look! I registered for a marathon!
Nana: (head tilted, concerned look on her face) Now, why in the world would you want to do that?

Though likely puzzled at first, I know that after a sufficient evaluation of my judgment she’d be there every step of the way. She would have come with me to find my running shoes, would have read all about marathons through Google searches (at which she was quite adept) and would have wanted regular updates on the training. As I share this adventure with you through this blog, I imagine that I’m sharing it with Nana, too.

So, a bit of a recap on the training so far. (Spoiler alert: no running superpowers have kicked in yet, but I’m ever hopeful.) When I first got the idea back in October, I could run slightly more than one mile, with quite a bit of huffing and puffing throughout. When I did the first weight training day of the training plan, I genuinely thought my body was going to snap in two – I was sore in muscles I didn’t even know I had. But, with each passing week, the mileage has increased and the soreness has become (for the most part) a reminder that I did something that day I never knew I could do. Each new distance has been a celebration itself and I find myself actually enjoying running. Who knew?!

Yesterday, I ran* 13 miles, which was the first time I’d run that distance outside and not on a treadmill. [*When I say “run,” I mean running and walking, which is how I plan to do the marathon. I’m not too concerned about getting a good time, I just want to finish!]

I’m not going to sugarcoat – it was really hard. The roads I drive on all the time suddenly seemed to be 8x more hilly and also, did you know that concrete is super hard? I seriously considered quitting at mile 11, and then again at 12, but I just had to make it to the full 13 (I won’t lie, there were some tears). Though I haven’t yet found those running superpowers, I felt like I had my own “super” support team behind me through all the encouragement you’ve sent my way. With all that positive energy, I hit 13.0.

As I head off to ice my knees, I want to thank you again for all of your motivation – you’re truly making all of this possible. Cheers to you, cheers to Nana, and cheers to having a few more weeks to train for the big day. Happy Sunday!

PS – A big shoutout to this supremely well-placed sign atop one of yesterday’s bigger hills.