It’s been almost two weeks since Grandma’s Marathon, and it’s still a little hard to believe…I’m so thrilled to share that we officially finished Grandma’s Marathon! And, I do mean we, because I wouldn’t have crossed that finish line without each and every one of you – it has been such an joy to go on this adventure with you.

Because of your immense generosity, through both the Crowdfunding Page and additional donations, we have raised over $7,000 so far for the Microbiota Therapeutics Program and the fight against the  C. difficile infection! I am blown away and am so, so grateful to you. The fund is still open, and I know of a few donations still on the way. I will give another update of our fundraising total at the end of July.

Until then, I want to share some highlights about the marathon with you! First of all, to the day before. Through the emails, messages, and photos of folks wearing “Running for Nana” bibs, I felt completely surrounded by your love, encouragement, and support. Huge thank you to my family for orchestrating those bibs – you are just incredible.

I felt honored to take you along “with” me on race day through this bracelet wrapped around my belt – initials for everyone who supported the fight against C. diff! 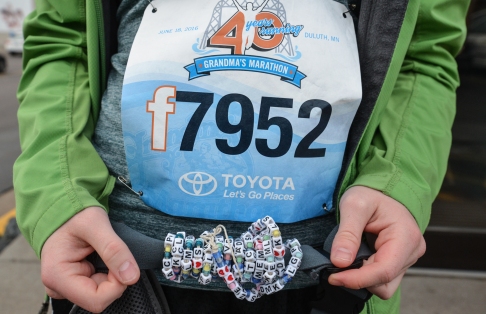 Everything started out well. My parents dropped me off at the line of school buses that shuttled to the starting line (a whole new kind of “first day of school”). On the ride, I met a really kind woman who was running her third marathon. She gave me some good advice – she said to treat it like a job: stand up straight and pull your shoulders back, even at the end of the day when you’re tired.

When we arrived at the starting line, there were more people than I’d ever seen in my life (more port-a-potties, too…). Here’s what I mean:

As I walked through the crowds, I was amazed. I’ve shared before that athletic aptitude was never a strength of mine, and I had often assumed there was a particular “type” of person that could do a marathon – I never felt like I was a part of that “type”. But when I looked around, my preconceptions were proved completely wrong. There were people of all ages, shapes, sizes, genders, and walks of life, and we had all signed up to run 26.2 miles that day. It was incredible.

When we approached the starting line and I saw the big “Grandma’s Marathon” logo, I was overwhelmed. I couldn’t believe that after all the months of training, preparing and sharing this adventure, the day was finally here. I made a mental note to enjoy every minute.

The race started out great, and I ran straight for the first 14 miles. The course runs along the coast of Lake Superior from Two Harbors, MN to Duluth, MN, but for the first several miles, you’re surrounded by huge trees – it felt more like we were running in the middle of a forest than along a coastline. The shade was nice though – we learned later that this was the hottest Grandma’s Marathon in 6 years.

I felt like Nan was there the whole time. At moments when I was starting to get a little tired or was about to hit a long patch of shade-less road, there were little “signs” from her – a particular song on my iPod, or someone shouting from behind “Love You More”. Call it what you’d like, but I know she was there.

At mile 14, I decided to walk for a mile and have something to eat. It also gave me a moment to listen to the “symphony” of sounds around me – feet hitting the pavement, water sloshing around, motivational words from one runner to another, and cheers of encouragement from tireless spectators. I alternated running and walking for the next few miles.

When they talk about “hitting a wall” – they aren’t kidding. Somewhere between mile 18 and 19, things were getting really tough. I mean, really tough. I couldn’t believe how long 26.2 miles was. By this point, the shade was scarce and the heat and humidity were really getting the best of me. I said out loud, “Nan, I really need you, but I don’t know how.”

I kept running/walking/hobbling along, and around mile 20 or so, I passed a band on the left hand side that was packing up their instruments (I never said I was a fast runner…). Someone running next to me said, “Looks like we’re too late for the band!”

She and I were running at a similar pace and started talking. Her name was Janet, and she was running her first marathon too – a bucket list item for her as well after quitting smoking several years ago. Janet told me that her father-in-law had been taken to the hospital, but that he wanted her to still do the race, so she was running for him.

I told Janet about Nana, and her battle with C. diff. I showed her the string of beads on my belt and our efforts to fight C. diff as well. At mile 21 was the nursing home where my Gram and Gramps (my Dad’s amazing parents) had lived for a number of years, and where I remember visiting them. When I told Janet this, she told me that her mom had stayed at the same nursing home and had contracted C. diff there – what a small world it really is.

As soon as she said that, I just knew that Janet was the angel Nan sent to keep me going. And keep going, we did. We ran/walked the rest of the way together, and chatted every chance we had.

My family told me that they were going to be at Mile 25, and I couldn’t wait to see them. As we approached Mile 25 in downtown Duluth, I heard my Dad call out my name and I looked over. Standing on the corner was my mom, dad, sister, brother-in-law, uncle, and two friends from St. Olaf who had come up to surprise me. They were all clad in blue (Nan’s favorite color) t-shirts, with “Running for Nana” bibs and pictures pinned on the front and back.

Now, if you know me, you know that I cry at a good Hallmark card. So, you can imagine that there may have been a little crying when Janet and I ran up. Here are a few photos: 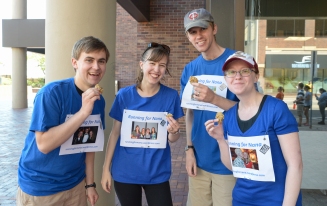 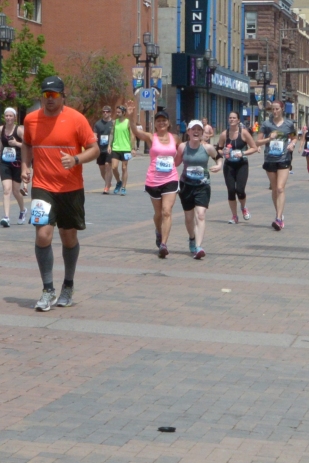 After that, I felt like I had already won. The last mile was so full of joy, and I knew we were really going to finish. My “entourage” scurried quickly to see us again near the finish line, and called out to us from atop bridges and on the side. Coming in to the final stretch to the finish line, my brother-in-law even ran along the side with me for a little bit! 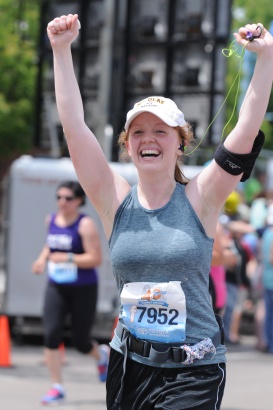 There are million other little things I could tell you about this day, but I’ll stop there. To each of you, thank you. You made this dream of mine a reality, made me feel like anything was possible, and made a huge difference in the fight against C. diff. I will write again with an update on our funding progress at the end of the month.

To Janet – thank you for being my running angel, and for making it possible to get to the end.

Until the next time – all my love and hugs to you!

PS – here are a few more pictures from the finish line! A huge thank you to my mom for this awesome pictures. She’s been capturing our special moments for our whole lives, and I am so thankful to her. Love you, mom! 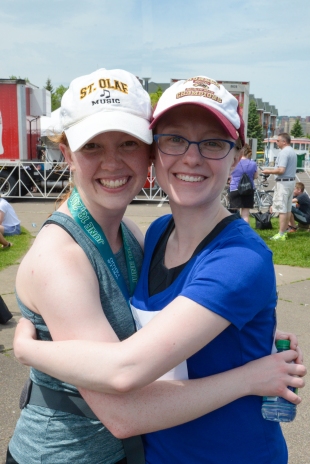